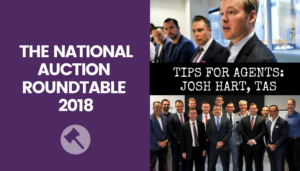 Other videos in this series TRANSCRIPT I think in my marketplace one of the key things is actually using auction. We’re a marketplace which doesn’t 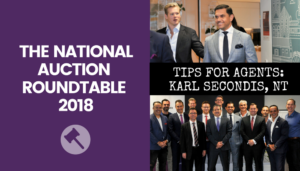 National Auction Round Table: The Skills of Great Auctioneers with Justin Nickerson

Other videos in this series TRANSCRIPT Steve Carroll: I was talking to Nerida, the REA Economist, and she was saying that the climate is such 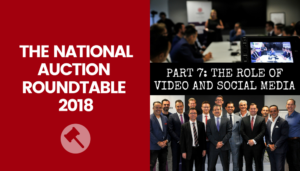 National Auction Round Table Part 7: The Role of Video and Social Media

Other videos in this series TRANSCRIPT Steve Carroll: Are agents using social media well to promote themselves? To promote auctions? I’ll kick off with yourself. 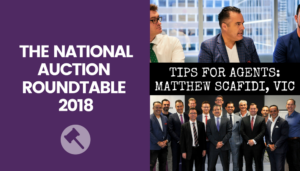 Other videos in this series TRANSCRIPT For all you agents that are thinking that auctions, you gotta remember that communication is the key. You got 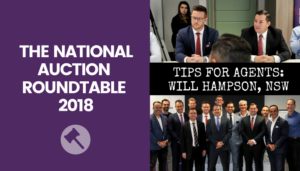 Other videos in this series TRANSCRIPT So, what really makes a successful auction campaign is great marketing, stand-out marketing, presentation of the property, having really 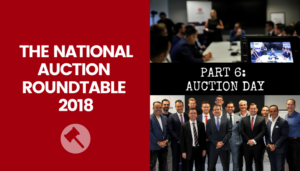 Other videos in this series TRANSCRIPT Steve Carroll: So I’m selling my house, this Saturday, it’s going to auction. What’s your advice to me as 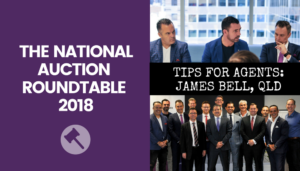 Engaging with your buyers: James Bell

Other videos in this series TRANSCRIPT The advice I’d give to agents that I work with all the time is, clearly, to make sure that 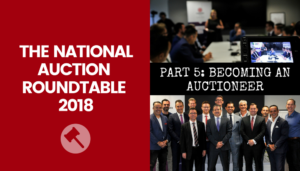 Other videos in this series TRANSCRIPT Steve Carroll: What’s the difference between an ordinary auctioneer and a very, very good auctioneer? James Bell: I think understanding the 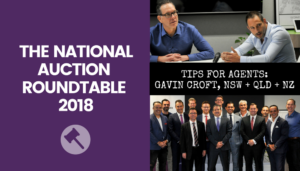 Auction as a method of negotiation: Gavin Croft

Other videos in this series TRANSCRIPT In regards to auction, the one thing that I would have to say is that real estate agents look 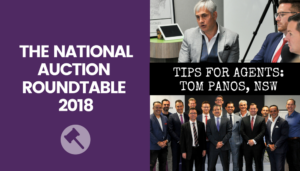 Luck is not a strategy for auction day: Tom Panos

Other videos in this series TRANSCRIPT Guys and girls. Listen very carefully. The market no longer will put the deal together. Fear of missing out. 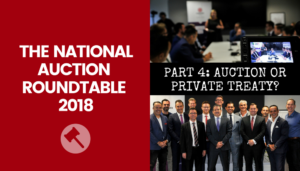 Other videos in this series TRANSCRIPT Steve Carroll: If we go right back to the beginning – so, someone logs on, they’re in research mode 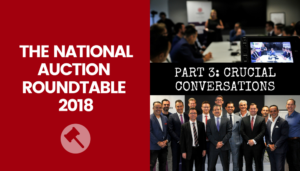 Other videos in this series TRANSCRIPT Steve Carroll: What I’m hearing from the table is there’s never been a time where the need to actually

Everyone has a role to play: Andy Reid 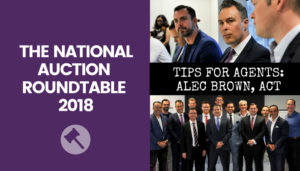 Saturday is not the only day of the week: Alec Brown 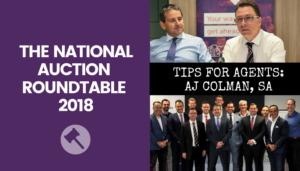 Offering all the options to sellers: AJ Colman 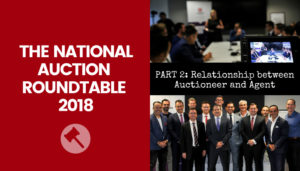 National Auction Round Table Part 2: Relationship between Auctioneer and Agent

Other videos in this series TRANSCRIPT Steve Carroll: I want to talk the relationship between the agent and the auctioneer. You know, there’s never going 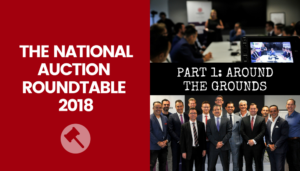 National Auction Round Table Part 1: Around the Grounds

Other videos in this series TRANSCRIPT Steve Carroll: Why don’t I kick off with, “What’s happening in the market at the moment?” We’ll kick off 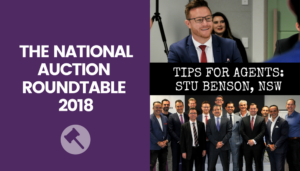 Steve Carroll: Are agents using social media well to promote themselves? To promote auctions? I’ll kick off with yourself.

Alec Brown: I’m probably biased as an auctioneer. I actually love watching livestream auctions, or auction highlights. I think what is becoming a little bit tiresome is the ‘just listed’ or’ look at this sale under the hammer’ and the chest beating. I think we need to strip away from that because the consumer is just getting bombarded with that bravado. And you know there’s a couple of people out there in our industry, Clarence White as an example, actually showing, ‘this is one that passed in, and this is what happened.’

And it just gives the process, as you stated, that authenticity. I mean, the reality is, in a screaming market, say 80 per cent clearance rate, there’s still 20 per cent of properties that don’t sell on the day, and we’ve got to remove that fear, that loathing, that ‘if it doesn’t sell it’s a failure.’ No, it’s just part of that process. And looking at it holistically as more of a 6-8 week journey, we hope it’s only 3 and a bit.

I guess the narrative of social media, once it can be done well, I think it’s often just too self centred. I think what we need to start thinking about is how those touch points from the social perspective really adding credibility to the industry more than just that showboating.

Stuart Benson: Why? Why? Just why are you sponsoring that? Why did you post that? Why? The objective is to generate engagement, but what sort of engagement? Do you want another 57 agents to give you a “like” and say you’re doing good? Are any of them buying that house? Are any of them going to make an offer on that house? Who’s your audience? Why are you putting that out there? What’s the objective of the post? There are agents in every marketplace I see, and if I thumb through the “likes” and the “reactions” and the heart emojis…90 per cent industry. Awesome.

Stuart Benson: I’m all for supporting each other, but you know, messaging is important.

Josh Hart: With social media, social means conversation. As an industry we need to be educating the marketplace and using that medium and actually showing that we are an expert in our area.
Yes, there is the branding component as well. But we’ve got to come back to what social means, it means conversation, and it means becoming that media expert. And we’ve just got to use that to our advantage. But I agree, there’s too much chest-beating out there, but that’s what people have seen so they’re just following the herd of the pack.

Will Hampson: Livestreams are really good, cause you see the live emotion of the day, you see the bidding, you see the buyers in the crowd, you see the vendors, and the agents that do the video testimonials for vendors and buyers, where it’s taken away from themselves, to show that experience on the day, to show the elation and/or to talk to a buyer about how they felt about bidding on the property. So showing more of that I think is a good thing, that it wasn’t that daunting.

Josh Hart: Auctioneers and agents could use that livestream also to their advantage. They’ve got a client there who has just listed with an auction campaign, something’s just happened around the corner, the livestream is done by another agent. They see, or tag them into it and say “Hey, as we discussed, go and watch that video.” And they’re educated about what the intention was, what the energy was, what the result was. And it’s not you being and taking advice from other people, it’s saying, “look, what happened, let’s all chat about it again later.”

Steve Carroll: Yeah, that’s a good point. Matthew, you and I are [connected] through Linkedin or Facebook, I remember, so how is social media working for you in Melbourne?

Matthew Scafidi: Social media has been huge for us. And it has been for a long time. But there’s some rules to engagement in it. And that is, you need to have your community involved. There’s no point, as we’ve all said, in having a whole lot of agents following you. I still believe that’s important, because it will get you referrals and it will get you business that way.

But, it’s about the community. And it’s about putting up posts that, as you mentioned before, all marketing is the same, you got to think about who your audience is. We’ve started doing a thing called “Mitchum Street Deets”. And basically it’s a 90 second video just running through every street in Mitchum. And we just put it up once a month. And the engagement that has got has been huge.
We’ve done three of them. We’ve had 3,800 views of those. All organic, nothing sponsored. The chatter that goes amongst the people we know…

Matthew Scafidi: I had this lady following me for months, and I didn’t know her address, and then all of a sudden she goes, “Aw, you’re in front of my house there.” “Beautiful, number 35…” [laughter] And away you go!
So, to Josh’s point, social media is conversation. And if you’re not conversing with the people on your social media page, we’ve about 3,100 followers on our page. None of them are from India or China. And it’s about putting out content that allows them to gain something from it. We sold a property, off market, on Facebook, two weeks ago.

Gavin Croft: Do you have someone specific for that role in your organisation, just out of interest? You’re the man?

Matthew Scafidi: Yeah, it’s all the way through. It’s about being consistent and having an approach. To your question before, Steve, about agents and whether they’re doing it right. These agents, that are wanting to be by themselves and not using their office’s page is ridiculous. ‘Cause they have 128 likes, they’re all family followers. I say to my guys, ‘Guys, put it on our page. And then share it from there to yours if you’d like. But you’ve got a 3,000 audience here, and 128 here.”

Colman: So I think in my marketplace, social media is very, very important. Obviously, it’s a marketplace that does very low volumes of auction. And I started before Facebook did Live. I’d just would put heaps and heaps of videos together. The CEO of The Society of Auctioneers would say, “AJ! You’ve done 50 auctions, but you’ve made 60 videos.” Like it was that ridiculous.

But I wanted to, I guess, educate our marketplace about what happens at an auction. Here it is because there was no Facebook Live. Then we transitioned into Facebook Live, and I took that, and I just ran with it.

And what I’ve noticed over the last 12 months is, let’s say at an auction I’ll have 10 bidders. Seven of the bidders would have seen me on social media before, and they just walk in, bit of registration, “Ah AJ, how you doin’?’ I’ve never met them. I don’t know them, but I have instant rapport, and they trust me.

Karl Secondis: One of the things that I’ve learned in a short time in a social media space is the stat is something like – Josh, you might know this – is that 70 per cent of people who watch video don’t listen to the volume. So, having text at the bottom through the translator, it’s quite easy to do once you know how. It has been very effective because people use that all the time.

We did one recently. We sent out a one-minute video. It was just filmed from an iPhone. It was really live and really authentic. Sent it out to our database and picked up three listing opportunities off it. Just from that, that’s a great opportunity.

Steve Carroll: So, that’s really interesting. We’ll just open that for discussion very quickly. I look at Gavin’s videos. I don’t think Gavin would ever do a video off his phone ever, because he likes the professional approach. You just said you picked up three listings on the back of a selfie. Anybody got any views on do you go pro, or do you go with yourself?

Karl Secondis: I think there’s a time and a place for that sort of more polished, refined, professionally clipped promo, whatever that is. But I think you’re going to achieve a very high quality result just with an iPhone. I mean, I follow Tom Panos’s kind of [format]…you just get yourself a mic, it’s all about sound and things like that.