Sadhana Smiles took her place in the boardroom as CEO of Harcourts NSW in October 2011. Now, as CEO of Harcourts Victoria, she still remains one of the few female CEOs in the Real Estate Industry. Based on recent events in the media, she believes it is very difficult for men in corporate Australia to understand some of the issues raised by our Prime Minister, Julia Gillard.

The recent performance by Julia Gillard and the subsequent viral spread of her message certainly indicates that one of the election issues may be about women and sexism in Modern Australia. Who would have thought that to be the case?

I find it amusing that Opposition leader Tony Abbott feels he needs to be seen as a feminist before he can hope to become the Prime Minister; even bringing out his wife and daughters to prove this fact.

It seems that women of child bearing age are becoming a powerful demographic and Julia Gillard’s recent performance in parliament probably won her a few of their votes.

I work with and coach a number of professional women and the most common issues I hear are regarding work/life balance, guilt and a lack of support or understanding from peers/employers/partner. Conflict arises with competing priorities and the pressure to make a choice between motherhood and having a career.

But why does it have to be a choice?

I work in a male dominated industry and in my sector I am the only female CEO in Victoria. However I am lucky to work for a progressive company where clearly my gender did not play a role in my appointment; my business owners and leadership team respect me.

I feel I can confidently say that it is difficult for some men to really understand some of the issues Gillard raises. Sexism is more commonplace than we probably realise. I personally have been at the end of a number of conversations with my male counterparts in the industry as a whole who I know would never ever have the same level of conversation with their male mates.

I find that labelling a man as sexist is just too hard because most of the time they just don’t get it. I find it easier to just get on with the job and ignore the comments. However, there have been times when I choose to ‘vaporise’ the individual and then I get labelled a ‘ball breaker’… one just can’t win!

I am not a supporter of Gillard or Abbott; however watching the PM’s speech I did feel a level of pride in how it was delivered. It was a passionate, feisty performance that used facts and left Abbott clearly uncomfortable.

The clear message to women was that it is ok to confront sexist language and behaviour, call it for what it is and be clear that it is unacceptable under any circumstances. I wonder, what will my male counterparts do next time I choose to point this out to them? I suspect I will get comments more drastic than “she has balls”.

Should I see myself as a trailblazer in my industry? A number of women come up to me on a regular basis and say it is just so great to have a female CEO, a female leader. They are proud of my achievements.

I see myself as a CEO who has a job to do. However I do look forward to the day when the norm is equality between men and women, the gender pay gap of 17.5% does not exist, there is no disparity on boards and senior leadership positions.

When equality positively impacts poverty levels and violence towards women is not devastating, societal change will be tremendous and something to celebrate.

Securing the female vote is clearly on the table now. I will watch with interest as the election draws closer and debates between Gillard and Abbott continues. 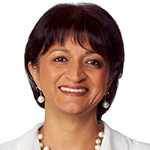 Sadhana Smiles recently became the CEO of Harcourts NSW. She has held several senior positions with some of the sectors most significant organisations in VIC and NSW. Sadhana has built a career upon strong leadership and driving businesses to become more engaged, connected, agile, resourceful and memorable.
SEARCH ELITEAGENT.COM
Close
QUICK NAVIGATION
Close
Log In