Greetings rockstars, Glee fans and Home and Away addicts. We’re back for our second-to-last recap of Luxe Listings Sydney where we pick up on the Vaucluse-auction-cliffhanger from last week.

If you remember, the quote was $14 million-plus and bidding had quietened around $17 million. Our man Simon is bidding on behalf of a girl named Sue, who hated the wardrobe but loved the view.

But after all that build up we’ve got a quick resolution for you on this one, it’s not to be – not for Sue anyway – the bidding goes off and Team Cohen is out somewhere in the high $19 million range.

The hammer drops at $24.6 million, with this now grabbing the record for being Australia’s most expensive home ever sold at auction.

“If someone wants to be the idiot that overpays, that’s their problem,” Simon says, although we are sensing he has already moved on before spitting his dummy into the delightful waters of Sydney Harbour.

(Side note: We believe that TRG’s Evan Williams and Ray White Double Bay’s Craig Pontey still have the other auction record for a block of apartments that sold back in 2017 for $33 million …)

Anyway, if there’s one thing we can rely on from personal experience there’s nothing like a shopping trip to get us out of a funk; so we’re happy to get out of Vaucluse and head over to Paddo for a visit with Gav and his tailor.

Gavin is weighing up the idea of a yellow suit. Yellow rhymes with mellow and given all of the tension boiling around the ‘Shani’ situation, it’s probably not a bad thing.

Anyways, according to the tailor, “no other agents are wearing yellow” and now we can’t help wondering if he’s the same guy that convinced Josh Tesolin to wear a pale pink suit to AREC this year.

Anyway – speaking of Shani, she interrupts Gavin’s deliberations between the golden wheat and eggnog shades of yellow via the phone.

She’s having a few dramas because he’s promised someone stuff will be done in a week, and apparently, her magic wand is on the blink.

He tells her to get it done and she snaps back at him like an angry teenager who’s been told she can’t go to the Billie Eilish concert because she came home late last night.

She tells him to calm the farm and we’re sensing an explosion about to take place.

Right now we’re praying for Shani and something light-hearted like a single date card. Where is Osher when we truly need him?

Our wishes are granted and we’re temporarily out of the Gaza strip and into Simon’s beemer, where he is talking about how passionate he is about building young people’s success while Liam (#FreeLiam) is picking lint off Simon’s jacket by hand.

They are heading to Queen D’Leanne’s new listing in Bellevue Hill.

Our Queen is throwing Daniella in the deep end today and we see her raking the backyard in six-inch heels.

But that’s not all, our Queen tells Daniella she is going to be ‘running point’ on the tour; and Liam will be playing lead buyer’s agent in the battle of the assistants.

Our Queen points out that Daniella will be representing her so she has to get it right.

And Daniella’s pitch to Liam isn’t totally awful, just slightly shy of mild verbal diarrhoea; a bit like reading 13 paragraphs of listing copy on REA, when all you want to know is if it has air conditioning and room for a pool.

D’Leanne: The only way you can oversell a house is by talking too much.

Anyway, we’re loving the dynamic between mini D’Leanne and mini Simon because Liam has clearly been to the Cohen Handler School of Duckery and knows how to unpolish every turd.

“This is all custom-built,” Daniella gestures to the kitchen a’la The Price is Right.

“It’s a shame it’s not very nice though,” Liam quacks us up, as always.

Simon thinks Daniella is lovely and enthusiastic but doesn’t think she will last (Simon clearly knows something about her acting ambitions, so…no surprises there). D’Leanne thinks Liam is too much of a mini Simon; potato, potah-to, yada, yada, yada.

We head outside and Daniella continues to overshare and informs us that the trees are heritage listed, so there goes any plan for a pool.

“I think they bring a sense of spiritual magicalness to the home,” Daniella says.

Simon talks numbers and says he will chat to his buyer but nobody is convinced.

The magical trees just haven’t sold us, either.

So, onto a house that’s a bit more us, “The Hamptons House” with TRG.

It’s a six-bedroom, four-bathroom new build that will make your heart sing for just $10 million.

Gav, call Simon: This is way better than Bellevue Hill.

It has a wine cellar, pool, 5m kitchen bench, leather handrails and is straight from only the best Pinterest boards.

Cae and Remi are doing the final touches before Gav rolls in for his video.

All of us are buzzing straight into the walk-in robe of our dreams. Gav wants more Louboutins in the wardrobe.

While we are still dreaming of shoe heaven, Gavin is telling us that nobody markets like him and to prove it, he has flown his videographers in from Brisbane for the shoot.

Which makes us wonder who he’s using at the moment with all of the COVID things stopping the crew from travelling from Queensland.

Maybe they’ve convinced GB and AP they are an essential service like the NRL.

Anyway, Gav tells us more about how great his marketing is, Elite Agent finally gets a minuscule (2.7 milliseconds) cameo in the showreel, and then it’s time for Remi and Cae to hit the lights and the locks.

Although there is more talking about last week’s mouse-gate between Gavin and Shani.

Cae: Did they have a little biff?

We love how understated Cae is but it feels like we’re heading toward something way more monumental… like the blowout between Athena and Nicole a few years ago on the The Real Housewives of Sydney.

A reminder in case you’ve forgotten:

(Any chance we could have a Season 2 crossover?)

So, it’s back to Double Bay and Simon has stopped picking lint and has delivered on the most wonderful thing we have seen so far on this show, apart from the shoes: Olly, the cavoodle puppy.

And to add some joy, the big blue bow around his neck matches the blue of Simon’s beemer. Life’s good, and Jen seems happy with the furchild instead of a grandchild – for now anyway.

Keeping the parents happy seems to be a theme of this episode with Gav heading to catch up with his dad for a beer.

Colin the pharmacist is a true gentleman. Proud as punch of his son and he isn’t afraid to show it. We love Colin. Colin reminds Gavin that he was a good dancer at school and Gavin says he doesn’t have time for that stuff now.

Colin tells him he should make time, and we can’t help but agree with him. Gavin says there’s no one special in his life like a gf or anything like that so maybe Colin is going to need a cavoodle soon too…

Anyway – Simon’s grabbed the passport again and he is back OTB in Cremorne Point in a five-bedroom, four-bathroom harbourfront home with its own private jetty sitting around $13 million.

The polite small talk between North Shore Queen Claudia Portale and Simon is loudly interrupted with the arrival of Simon’s client, who sounds like she might have just done the Cremorne Point walk in six-inch Jimmy Choo’s to get to the showing instead of finding the front door down a hidden back-street (like normal people).

“Every now and then you get a client that’s a little out of the ordinary, you’ve just got to go with the flow, right…” Simon feels he needs to explain all of the yelling to us because even he knows that nobody raises their voice like that on the North Shore.

Anyway, Tamara from Russia finally makes it to the elevator in all her purple coat fabulousness but looks let down already.

Claudia tries to show her the view again and Tamara just looks unimpressed and says “niet” to all of it. She needs more gold and tells Simon money is no object.

So the moment we’ve been waiting for has arrived – Gavin’s birthday party.

Now, if only we could grab Mr Shue and Rachel for some kind of Glee-style singalong/mashup for the drive up to Home and Away (Palm Beach) territory to take our minds off what’s no doubt about to go down…

Rachel: You know we belong together…

Mr Shue: We gon’ party like it’s your birthday…

Rachel: You and I forever and ever…

Anyway, there are no singers, no glee, no glitz, no glam, no Home and Away extras – it’s just a tent with cushions but we are sort of here for the boho-chic.

Everyone starts arriving and for the first time we meet some of the TRG WAGs, so it looks like some of them do have some semblance of a life outside of work.

Arriving single though are Olly, Cae and Cae’s cardi – but the three of them are probably too busy for relationships as they are still vying for that $50,000 Bunnings voucher from Episode 2.

Birthdays are supposed to be happy occasions but again we can sense a storm on the horizon and the drama lamas are definitely on their way over.

Gavin says to Shani, “Can we have a chat please” and we can tell it’s not for a romantic beach walk, and no one is getting a rose tonight.

Instead, they bicker about who said what to who, and what can be achieved in a week and what it can’t be.

It seems like Gavin has his own ideas of what someone else can do and they bicker about who is talking in what way to who and what is acceptable.

Ultimately Gav plays that old leadership trump card of “you’re on my payroll and that’s that,” which is not something Simon Sinek would recommend but hey, this is not our show.

It’s glaringly obvious that this is a one-way train and you’re either on with Rubinstein, or you’re off, and there are no ticket refunds available.

Gavin: I put business before everything else in my life.

So that’s it folks.

We’re ending this Ep deep in tissues with an overwhelming sense of sadness and hope that the finale next week can somehow cheer up our broken hearts.

Nikki Horner is an Executive Assistant in the competitive and glamorous market of Canberra – who has written for Elite Agent a number of times when a celebrity demands it.

Samantha McLean is the Editor of Elite Agent and is pretty certain everyone will read this piece with the love and humour it was written with. 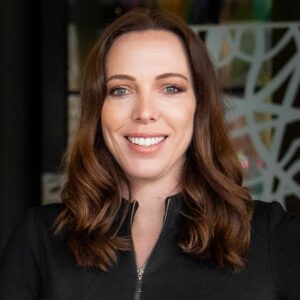