When First National Byron Bay principal and director Chris Hanley speaks of his agency, he talks in terms of the “likeable people” who make up his team.

“We have four women who have made a huge contribution to us being named the top sales office of the 430-plus offices in the First National Network for the second year running,” Chris says. “That’s no small achievement for little old Byron Bay.”

Chris makes it sound simple, but this is a hand-picked team put carefully through their paces. Before becoming a sales agent each is required to prove their mettle, notching up months of prospecting calls and swatting up on the best practices in the business.

He likens it to learning a sport, where you have to build up the required callouses in order to become proficient. “They need to get used to the industry, the rejection and people who say no, and that takes a while,” he says. The result is a passionate group of real estate ‘athletes’ who are committed to playing the ‘long game’.

The average time people work at First National Byron Bay is over a decade, and among them is a group of highly experienced, highly successful women, each leading their own team.

Leading the charge is director and sales agent Su Reynolds, who is ranked amongst the brand’s top 10 agents in Australasia. With almost 30 years’ experience under her belt, she says she couldn’t imagine a life without real estate.

Her expertise ranges from residential to lifestyle, commercial, industrial and rural properties, and extends across all price brackets. And, like all at First National Byron Bay, her career started by putting in the hard yards.

“I came to Byron Bay and First National in 1992. In the early 1990s people weren’t prospecting that much so I started at one end of Byron Bay and continued to the other, knocking on doors and building a database of people who I kept in contact with.”

That database reaped results, with Su establishing an enviable profile in the industry and the community.

Then, about three years ago, she reached a turning point. Averaging about $700,000 a year in gross commission, Su knew she physically couldn’t put in any more hours to achieve further success.

“I couldn’t sleep any less, I was already working nights and there simply weren’t any more hours in the day, but there was still business to be had.”

I knew it was a big thing leaving my listing with someone else, but I had complete confidence it would be as if I were there with Luke.

It was time to take the step of building her own team, and the catalyst came as she was about to go on annual leave. Su already shared a few listings with fellow sales agent Luke Elwin and the pair seemed a good working fit.

“I knew it was a big thing leaving my listings with someone else, but I had complete confidence it would be as if I were there with Luke.”

They were soon joined by Kate Stanford in sales support. Now the team of three works as a well-oiled machine, with Su handling sellers and listings, Luke looking after prospecting and buyer management, and Kate taking care of organising and reports.

“It’s not only changed my results, but my life as well,” Su reflects. “I don’t work any fewer hours but they’re a lot more productive.”

The relationship is built on implicit trust, mutual respect and accountability. And that offers everyone freedom to learn, grow and achieve success, Su notes.

“I know my team learn best by following my example. I’m always aware of that; it makes me a better agent. Not only does their income depend on me but their quality of work life and their life outside work as well.” 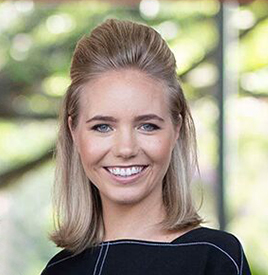 With a background in sales that started at the age of 14, Tara Torkkola always knew she wanted to work in real estate. She made the commitment 10 years ago when she first moved to Byron Bay and hasn’t looked back.

“I spent a year talking to Chris and doing research,” she explains. “I started out in hard-core prospecting, all day, every day. I feel like I started with the hardest part, but it paid off.”

Tara soon moved from sales assistant to sales agent and, with impressive figures to her name, the impending arrival of her first child three years ago saw her decide it was time to bring in help.

We would pass the baby around while prospecting. It was all about multi-tasking and the work was being done.

Tara now leads a team of two others, with Sally Green looking after client care and Lilly Jones working part-time on
the ‘backend’ tasks of systems and social media.

“I think when I reached a GCI of $500,000 to $600,000 I felt I couldn’t manage any more on my own,” Tara explains. “It was just before my first baby and it was a huge risk to make such an investment at that time; but it was the push I needed, and I’ve had my three best years ever as a result.”

Tara says her team members are not just colleagues but also part of her family. “I have responsibility for their welfare, but they also feel that for me. I trust them. They are the type of people you welcome into your home.”

Ten months ago, Tara had her second child, and notes in the immediate weeks afterwards the crew rallied around her, working from her home.

“We would pass the baby around while prospecting. It was all about multi-tasking and the work was being done.”

Tara says her leadership style is one of example. “I want everyone to own their role. They’re making decisions on my behalf and when they start making the wrong ones, that’s when I’ll look at getting involved.” 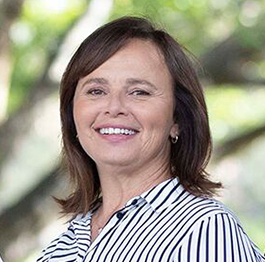 At 47, Helene Adams entered the real estate game a little later than most but came armed with a 20-year background in sales. Now she’s building a successful business focusing on the lifestyle property segment.

Helene explains her career turning point came when purchasing her own home in Byron Bay.

“I dealt with a lot of agents and had the chance to sift out the good and the bad. I found Su Reynolds and was just so impressed with her customer service. I had an epiphany that I should become a real estate agent.

“So I approached Su, who put me on to Chris, and then I went through a gruelling six-month interview process.”

That was four years ago and initially Helene worked with Su before going solo.

I was a lone wolf and needed to do something. Now I go to bed smiling at night.

“My first listing was two properties in a strata set-up, one at $1.4 million and the other $1.2 million. I learnt the process and my next listing was $2.4 million. I’ve then stayed in that price range. I’ve had a couple of really good properties.”

Helene says she has also known a lot of people in the community for a long time. “Real estate is about building trust and relationships. And the foundations are set for that so far.”

Recently those foundations proved so strong that Helene took the step of bringing on team members to assist with sales creation, digital media and IT.

“All of a sudden I’m blessed with two guys who specialise in that. Within two weeks I had my own website and blogs. I’m loving it. I know the results are coming and already they’re trickling through. I talk all day and [the team] prop me up.”

“It’s like a marriage made in heaven and already we’ve surpassed the results of last year. I was a lone wolf and needed to do something. Now I go to bed smiling at night.”

Helen Huntly-Barratt came to First National Byron Bay with a wealth of experience behind her. She had previously worked for some of the industry’s biggest names in Sydney, with a resume that included establishing new offices and training agents.

“That’s how I met Chris,” she says. “I walked into the First National office and could see it was by far a standout business. Basically, I doorknocked him and he’s never forgotten it.”

Helen took time off to travel overseas, but when she returned knew it was time to “get back on the tools”.

“I was about to sign a contract with another brand. Chris said, ‘Don’t sign anything yet. Have a coffee with me and just give it 20 minutes’.”

Two hours later, Helen was an agent for the First National brand.

Twelve years later, Helen is a director of First National Byron Bay and has just appointed an assistant. The decision to bring in help comes off the back of one of her best years to date.

It was the support of the team around me that gave me the confidence, tenacity and determination to kick some goals in a community I didn’t know.

“It’s just not sustainable. We all talk about real estate being the long game, but how many agents consistently write $800k to $900k on their own? I did it once, but I was exhausted. You have to have people to step into the role if you need them to.”

Helen’s team member is Jasmin McClymont, who came to her through the “Chris Hanley recruitment filter – which is one of the best recruitment filters I’ve ever seen,” she adds. “He has this knack and feeling for it.”

Now Helen is looking to employ similar leadership tactics as she takes her business to the next level.

“It’s about listening, trusting, and caring, rather than just talking. People need to trust you and see you doing everything in their best interest. Great leadership is just that.”

Meanwhile, Helen notes, agents may get the focus but behind the scenes there’s a wealth of invaluable support. “We have so many resources in our business, it’s like a jigsaw. When it’s working beautifully it’s just a beautiful thing to watch.”

Cassandra Charlesworth is a features writer for Elite Agent Magazine with over 15 years’ journalism experience in metropolitan and regional newsrooms. She has a specialist interest in real estate, tech disruption and a good old-fashioned “yarn”.
SEARCH ELITEAGENT.COM
Close
QUICK NAVIGATION
Close
Log In