Rust Mansion is for auction in Tacoma, Washington state, with a price guide of US$4.8 million. 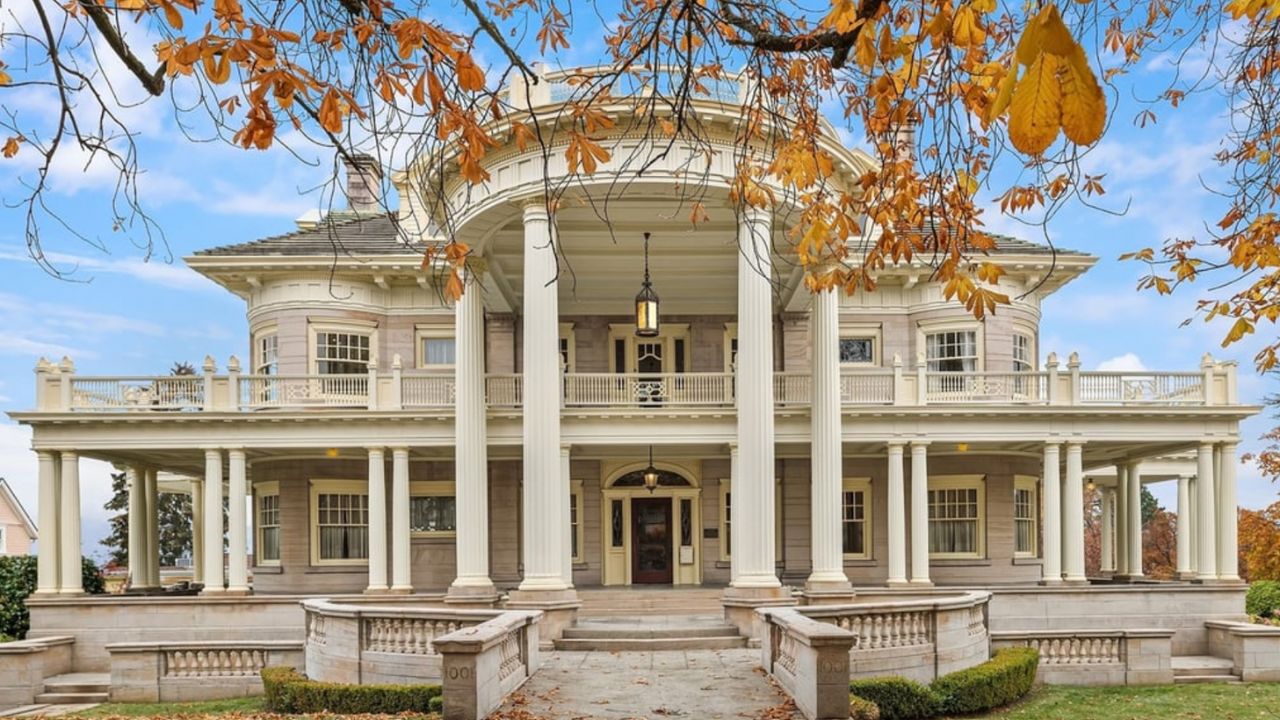 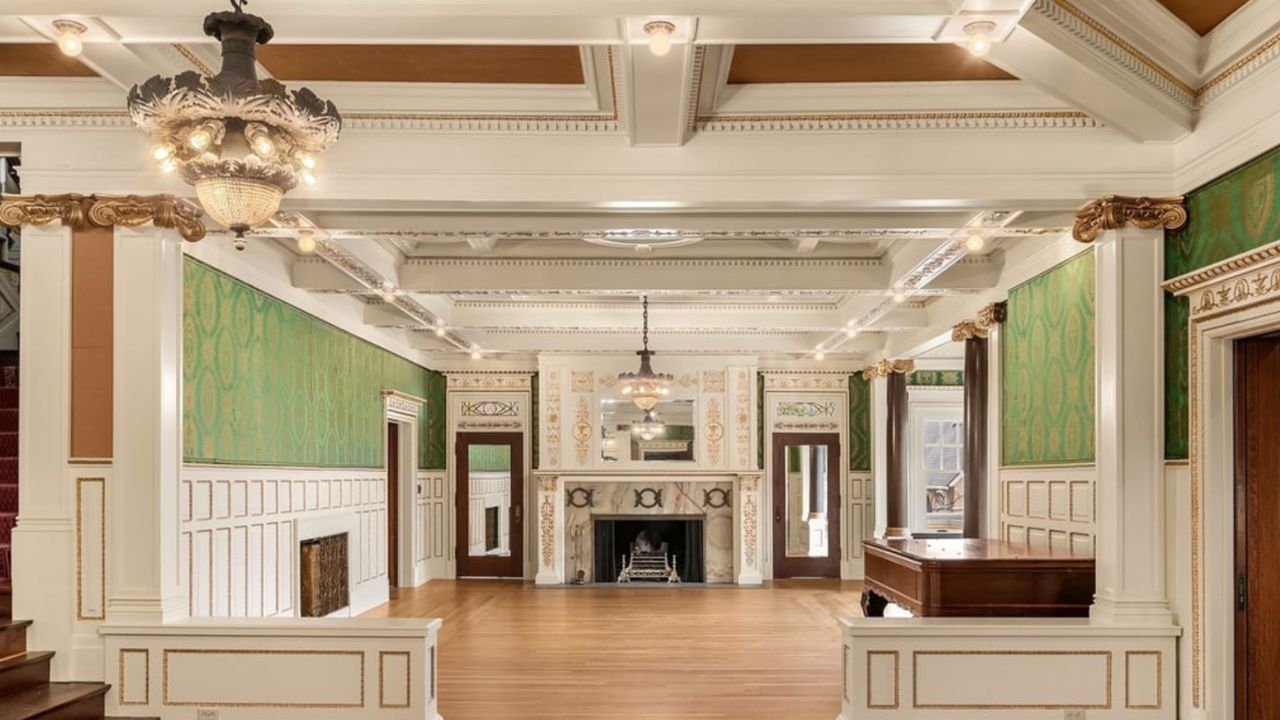 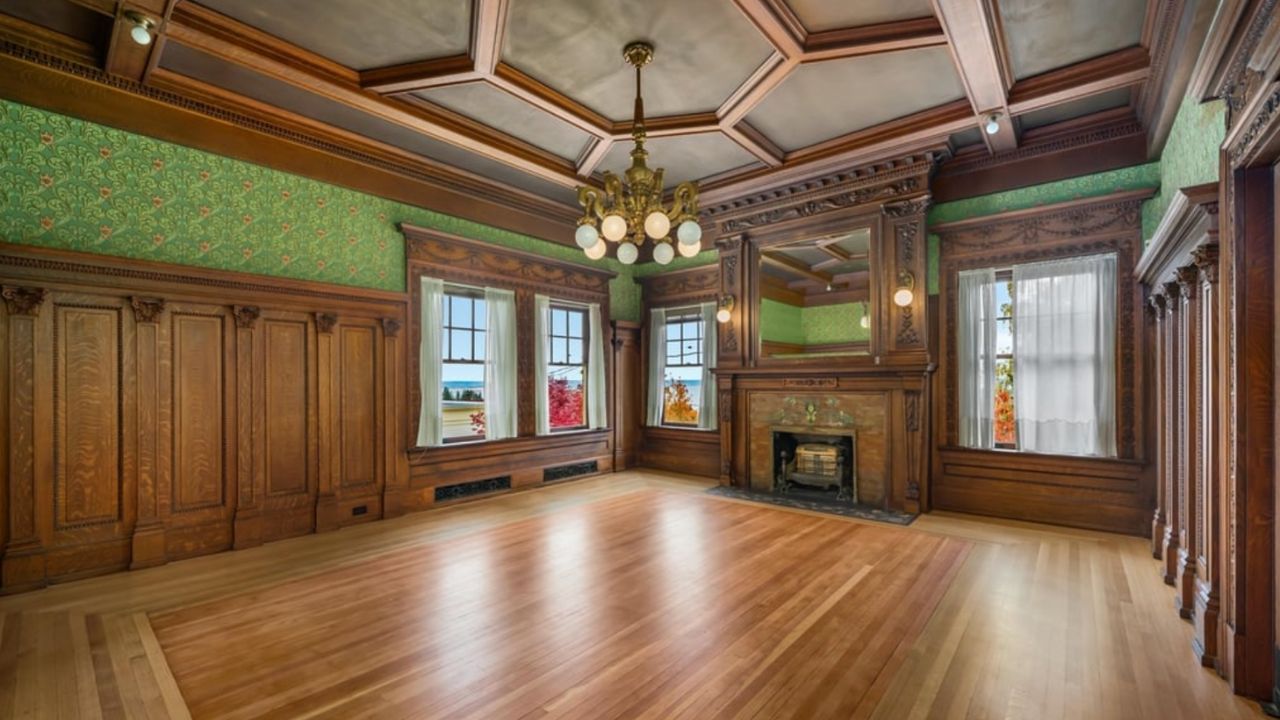 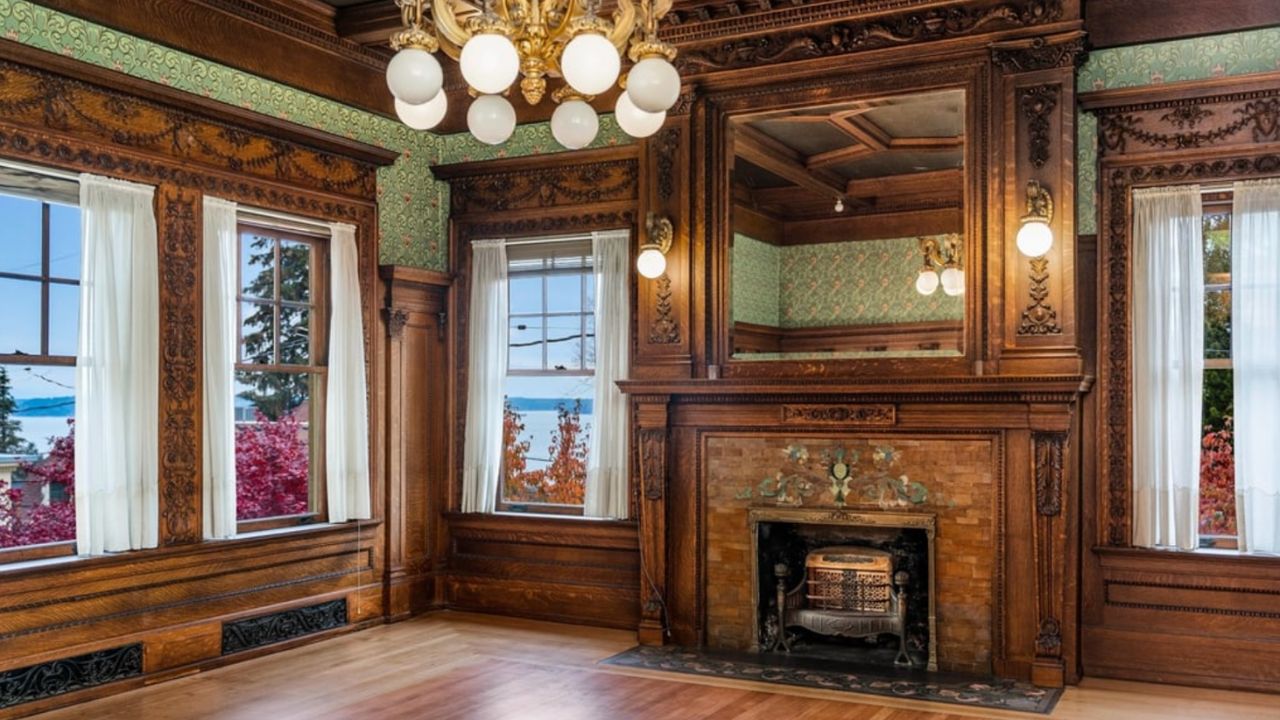 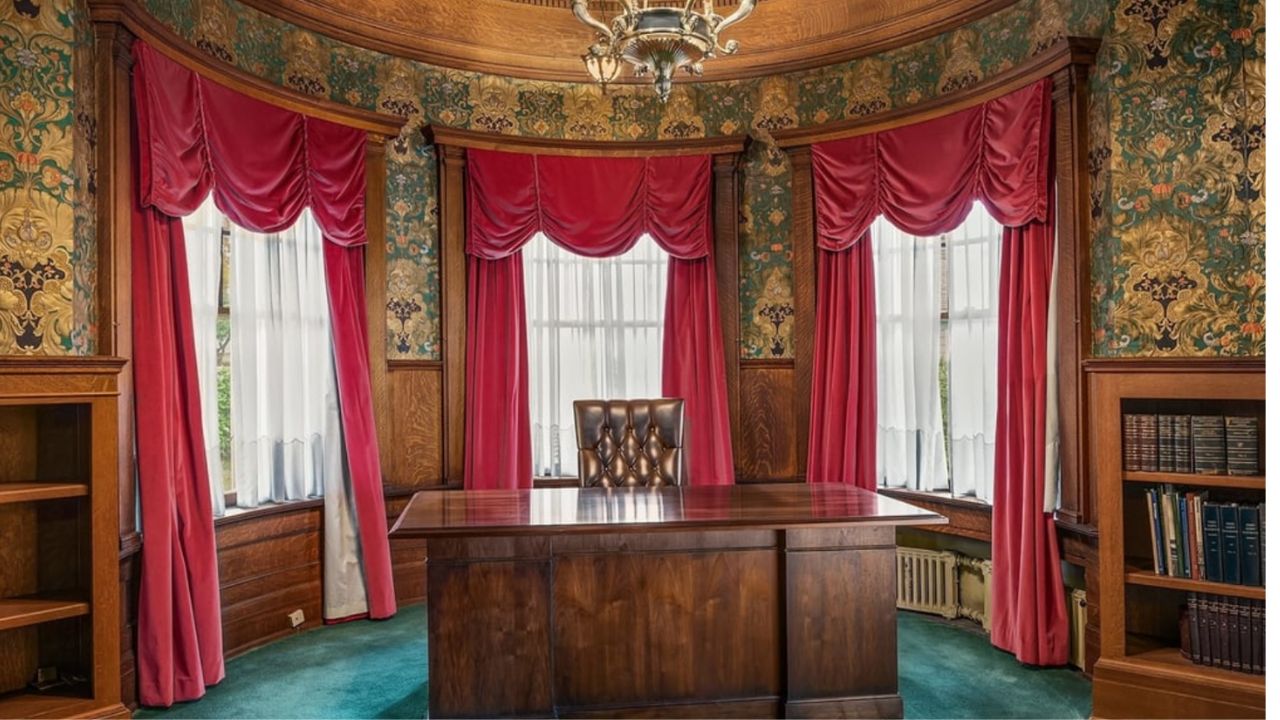 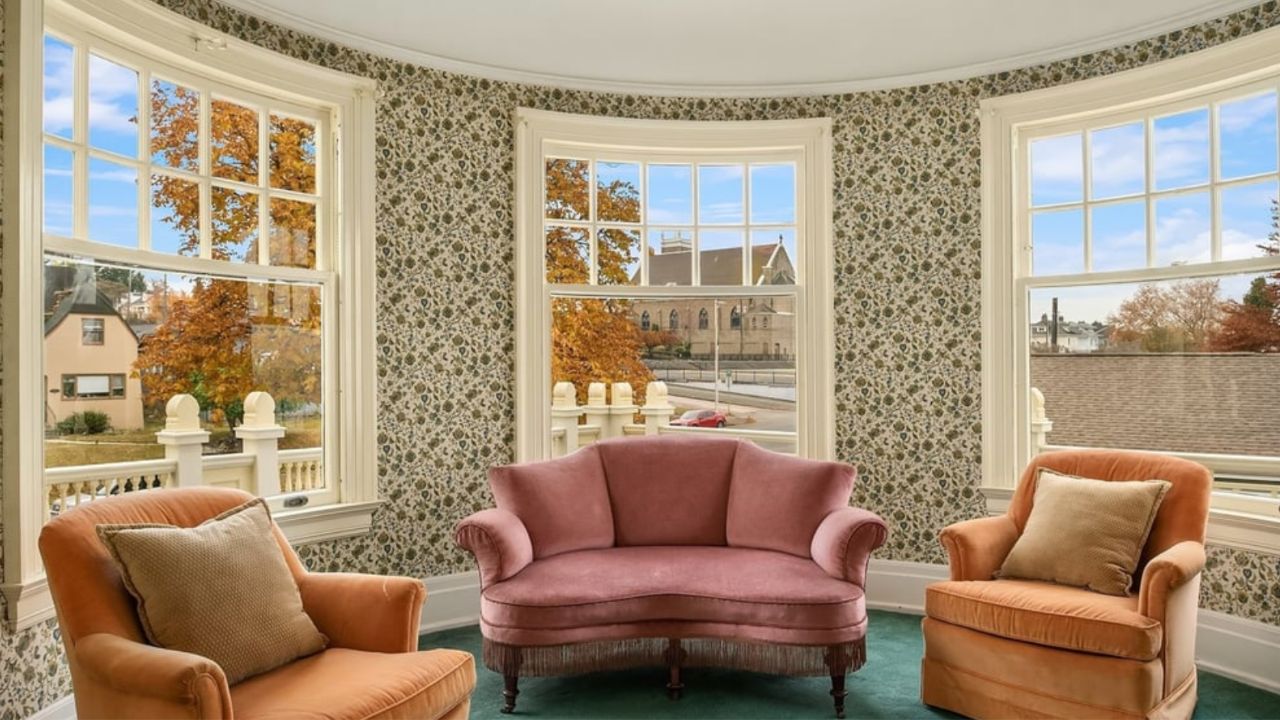 Often referred to as the “White House of the West”, one of America’s most captivating mansions has hit the market in Tacoma in Washington state.

The circa 1907 property, known as Rust Mansion, was originally designed by architect Ambrose J. Russell for William Ross Rust, who ran the American Smelting and Refining Co.

Spread across four expansive floors, Rust Mansion has recently been painstakingly renovated by the home’s first female owner, Ashley Burks, and is scheduled for auction in February.

There is no reserve for the seven-bedroom property but it has a price guide of US$4.8 million, according to its Zillow listing.

Features include a grand facade with Roman Doric columns and a sunken porte-cochere, while inside awaits a level of refined grandeur rarely seen today.

The main level includes a reception hall and living room with restored wood floorboards and wood paneling, which is complimented with original green tapestry wallpaper.

All of this pairs with coffered, ornamental ceilings and intricate plasterwork.

According to South Sound Magazine, Ms Burks bought Rust Mansion in late 2021 for US$2.5 million and set about restoring the rundown home to its former glory.

This included hunting down historical tiles, recreating original moldings and giving a new lease on life to worn hardwood floors.

Ms Burks was also lucky enough to find original doors, hardwood, trim and tapestry hidden throughout the home and in the garage.

“I could not have had better fortune with all the treasures found throughout this process,” she told South Sound Magazine.

One of the most stunning features of the home is the grand mahogany staircase leading to the second level, and it’s here where Ms Burks was able to remove the marks on the floors that showed where walls were added when the home was converted to apartments between 1920 and 1983.

“I was able to (revive) the original hardwood throughout the entire home and, with spare floorboards found in the garage, repair and salvage the upper hallway flooring,” Ms Burks said.

On a website dedicated to the property and the auction, Ms Burks said she felt a sense of responsibility in restoring Rust Mansion.

“Although the Rust Mansion is in my possession, I know the people of Tacoma have a deep connection to the property, and to some degree, this is the home of the community,” she said.

“I feel a great responsibility to share this restoration process with our beloved Tacoma natives. If I inspire other single women and mothers to take a chance in the process, that’s icing on the cake.”

Ms Burks said she was the first female to purchase Rush Mansion and she was proud of having owned it.

“This property is as majestic as they come, so, similar to most Tacoma natives, I have marveled from afar at what always felt like an unattainable opportunity,” she said.

“Having the privilege to restore the Rust Mansion is nothing short of a dream come true.

“I hope the careful restoration showcases my appreciation for the property and its history while allowing me to leave a little mark of my own history.”

Other features of Rust Mansion include a timber panelled dining room and kitchen, lower level ballroom with a billiards room, stage and access to outdoor spaces, and a primary bedroom with an attached bathroom and sitting rooms.