Sixty Australian and New Zealand property specialists have returned from the 2017 RE/MAX R4 Convention in Las Vegas with an even greater appreciation of the global reach of the RE/MAX real estate network having shared valuable experiences with more than 6000 international colleagues.

“The strength of the RE/MAX brand is remarkable,” said RE/MAX Australia and New Zealand Managing Director, Michael Davoren, “and what we hear and see at R4 really brings this point home.”

RE/MAX is now in more than 100 countries, with much of the growth in recent years occurring in South America, Africa and Asia-Pacific. With much potential recognised in New Zealand, Australia and all of Asia Pacific, it is anticipated that this region could see as much as 70 per cent of 2017’s global growth.

RE/MAX encourages its agents to network and refer around the globe and has produced a Global Referral Guide, which is available to all RE/MAX agents.

“RE/MAX figures showed that we, as agents, were the most productive in the world, outselling other agents by two to one,” Mr Davoren said, “and that is twice as many families helped and twice as many dreams realised.

“Earlier this year, Entrepreneur magazine’s Franchise 500, which is accepted as the most comprehensive ranking in the world, named RE/MAX as the #1 real estate franchise and #10 franchise overall.” 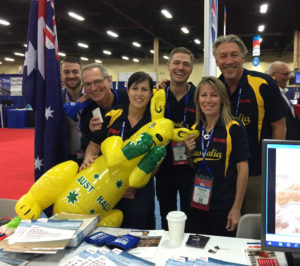 MC Wayne Brady, host of the CBS daytime game show ‘Let’s Make a Deal’ and recognised by People magazine as an ‘improvisational guru’ opened the program on 27th February, introducing RE/MAX founders Dave and Gail Liniger, who still take a very active role in the company after 43 years.

Mr Liniger told delegates, “Nobody in the world sells more real estate than RE/MAX, in terms of residential transactions. Nobody. And that’s because of you. One World. One RE/MAX.

“Congratulations to each of you – wherever you are – for your part in this incredible achievement.”

R4 speakers included international positive psychology coach, Caroline Adams Miller; professional expeditioner Erik Weihenmager, who lost his sight at age 14; and Molly Fletcher, a successful sports agent who CNN calls the ‘female Jerry Maguire; plus some of the most successful agents and owners in the global RE/MAX network. Grammy Award-winning Dierks Bentley’s concert closed the event at the Mandalay Bay Resort and Casino on Thursday evening.

“R4 was a great opportunity for our Australia and New Zealand people to network, learn and be inspired,” Mr Davoren said.

“The annual R4 Convention is like no other real estate industry gathering. Just the physical numbers of people, the calibre of speakers, the quality of entertainment and knowing that it represents a real estate brand in more than 100 countries is extraordinary.”

RE/MAX Australia and RE/MAX New Zealand were two of six regions nominated for the RE/MAX Global Region of the Year award. South America was announced winner for this year.

“To be a finalist – for both Australia and New Zealand to be finalists – is in itself is a huge honour and recognition. It reflects a team’s hard work.

“The Directors are certainly proud to be nominated but even more proud of the accomplishments we have made to-date and what we will accomplish in the future. 2016 was a big year for all of us and 2017 will be even bigger,” Mr Davoren said.