The CoreLogic May Home Value Index results out today confirmed that the capital gains trend has slowed over recent months with dwelling values edging 0.4% higher over the three months ending May 2017.

Highlights over the three months to May 2017:

According to CoreLogic Head of Research Tim Lawless, Australia’s capital cities saw a cooling of housing market conditions over the seasonally weak month of May, reporting a -1.1% fall in dwelling values across the combined capitals. The month-on-month fall was largely the result of declines in Sydney and Melbourne, where dwelling values have recorded significant gains over the current growth cycle to date. 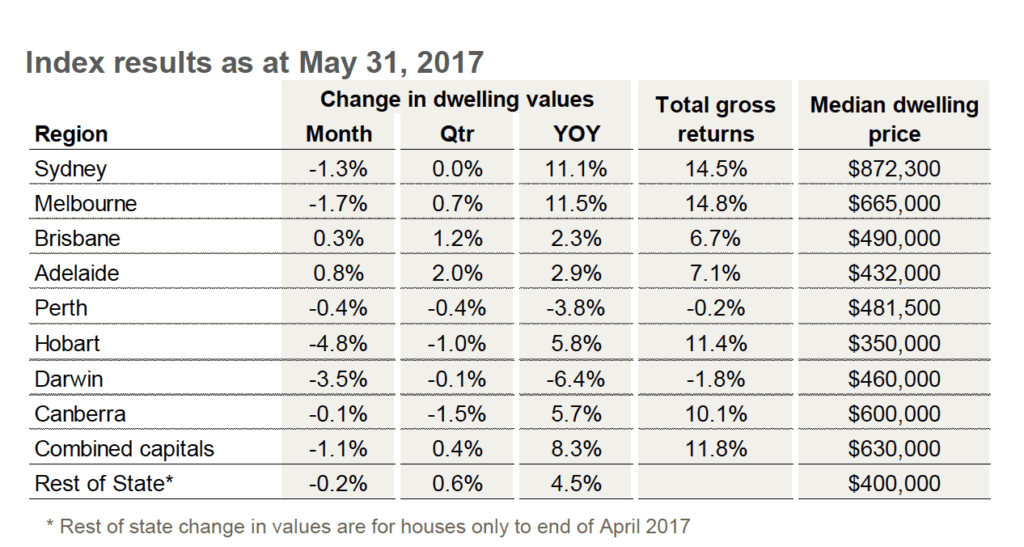 “The trend in growth rates across the smaller capital cities was mixed with dwelling values across Brisbane and Adelaide continuing to inch higher while values in Perth and Darwin showed further easing over the most recent rolling quarter.  A steep drop in the Hobart index has reversed the gains recorded over the previous quarter and the Canberra index was also -1.5% lower over the past three months.”

“The May home value results should be viewed in the context of demonstrated seasonality; values have fallen during May in four of the past five years.  Reading through the seasonality indicates that value growth in the market has lost momentum, particularly in Sydney and Melbourne where affordability constraints are more evident and investors have comprised a larger proportion of housing demand.”

Mr Lawless said, “Adding to the complexity in reading the current market is the recent Australian Prudential Regulation Authority (APRA) announcements at the end of March for a new round of macroprudential measures aimed at slowing the pace of interest only lending.”

Subsequently, he said, “Mortgage rates are continuing to trend higher, particularly for investors.”

“Another factor that is likely contributing to slower growth conditions is a dent in consumer confidence.  Consumer sentiment towards housing, as measured by Westpac and the Melbourne Institute, has shown a marked downturn in May.

“In particular, the Westpac ‘time to buy a dwelling index’, fell 6.5% over the month.  According to Westpac, ‘consumer sentiment towards housing shows an increasingly negative view’.

Other market indicators suggest a slower pace of growth such as a reduction in market activity, a moderating trend in auction clearance rates and rising advertised stock levels.