Australia’s apartments pacesetter, Harry Triguboff, is paying no attention to talk of a Sydney market slowdown by unveiling his Meriton group’s plans to release three new projects, collectively worth more than $1 billion, before Christmas.

The projects are in Dee Why, Rosebery and Mascot and they are coming on to the market on the heels of Mr Triguboff launching the biggest development in his long career, more than 3,000 apartments at Pagewood in the Eastern Suburbs.

The 83‐year‐old developer yesterday said that hectic sales at his Pagewood Green community showed that buyers still had plenty of ‘oxygen’.

“Yes, we had what you might call a blip two or three months ago when the market was adjusting to tighter lending rules for offshore buyers.

“That blip’s history, the market’s re‐adjusted, and as far as Meriton is concerned, things are back to normal.

“We’ve got buyers, we’ve got sites, and we’ve got some great projects underway.

“Rents are strong, investors are happy, and the horizon looks to be clear of any interest‐rate shocks.

“I’ve got my finger on the go button and we expect to have some vigorous sales activity in the run‐up to Christmas.” 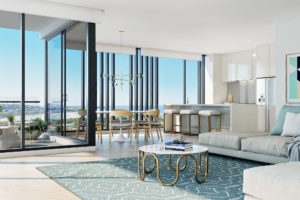 Meriton’s major pre‐Christmas release will be stage one of Lighthouse, a 350‐ apartment project in the heart of Dee Why, 850 metres from the beach.

Lighthouse, which is set to include the suburb’s tallest buildings at 17 storeys, will include a retail precinct with supermarket, dining and community piazza, and a childcare centre for 130 children. 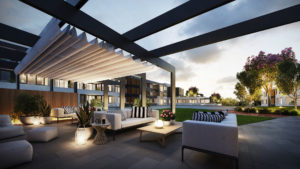 At Rosebery, the company is launching phase one of an 895‐apartment project, The Gallery, on a $190 million, 4.9ha former warehouse and factory property in Rothschild Avenue.

The first release, the Mint Collection, will have 187 apartments in a six‐level building and will include a childcare centre for 88 children. 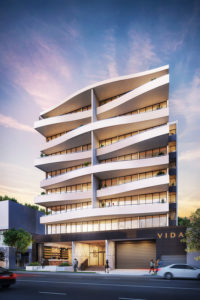 Meriton’s new Mascot project, Vida, is an 8 storey development on Gardeners Road and the first of Meriton’s Platinum Collection series.

The two buildings on the 1626sqm site will house 46 apartments.

Mr Triguboff said the three new projects would showcase Meriton’s efforts to ‘continually step forward’ in terms of the quality, ambience and size of its apartments and the lifestyle on offer.

“Buyers are becoming more and more sophisticated, some might say choosey, so our challenge is to meet their expectations.

“Our reward is seeing them happy and being able to be proud of what we’ve sold them.”

For expressions of interest visit meriton.com.au.