How many of last years New Year’s resolutions have you kept? Peter Hutton looks at why we get distracted and how to say on course to achieve your goals in 2013.

If you’re like me, you go to training events and walk out with your head swirling with great ideas to improve your business. For a real estate agent I’m talking about great ideas like lead generation systems; great ideas for a better listing presentation; great ideas about growing your social footprint.

Why is that, do you think? I’ve considered this problem a lot over the years and here’s what I’ve found.

It’s because we’re easily distracted and taken off what I call the ‘Direct Path to Success’.

The fact is, we’re human and it’s hard- wired into us to get distracted. It’s a survival mechanism that has its roots in prehistoric days when we were foragers and hunters, with sabre-toothed tigers to contend with.

I was asked to help a small independent agency to help them grow their brand. The principal was convinced the challenges he was facing were as a result of not having the right systems and they needed a systems transplant.

He’d recently invested in a comprehensive agent training program with another leading real estate trainer. A well respected training program, I might add. And when we sat down to discuss his problem he slapped the ‘operation manual’ for the program down in front of me. “That’s my problem,” he said, tapping the manual. “I just don’t have the time to get all this done and I have all these things I need to take care of first.” Sound familiar?

But was that really the issue? Let’s take a look at the real problem…

Survival Mode
The first thing we humans feel compelled to take care of is our self-preservation. We want to survive. That’s part of our DNA. The big problem with being in ‘survival mode’ is we get into ‘short-term action- taking’ behaviour. Yeah, it might look like we’re taking care of business but really what’s happening
in times of ‘survival mode’ is we’re just in reaction to our challenges and unwanted circumstances. It’s a lot like putting out fires. It appears to us to be absolutely necessary. We think we’re taking the right action, but are we? The thought of going from 10 to 50 created a feeling of overwhelm. The result? She took no action at all to reach this goal.

In times of high challenge our prehistoric survival mentality kicks in and blows it all out of proportion. So we get busy putting out fires. This is what distracts us and takes us off the ‘direct path to success’. Which results in us saying to ourselves, ‘I’ll get round to implementing that great idea tomorrow.’ But tomorrow never comes, right?

Instant Gratification
Great ideas take effort to make them happen. We all know that. This means we’re going to be made to wait to receive the gratification we want from implementing a new idea. Now for most of us mere mortals that doesn’t sound like much fun, does it? We want our gratification now. We live in an ‘instant gratification’ world where we can get pretty much what we want when we want it. No waiting.

My grandmother used to say, “The best things in life are worth waiting for.” Isn’t that true? But that kind of thinking is virtually non-existent these days.
The need for instant gratification results in action-taking that gives you an instant pay off, but often doesn’t actually help you get where you want to go. Like just now while writing this article, I had to go onto Facebook; well, I didn’t really have to, but that need for a ‘quick-gratification-hit’ took over and five minutes later I found myself wasting time on something that took me ‘off-track’.

Walter Mischel’s famous ‘Marshmallow Experiment’ examined gratification in four year olds. The children were given the choice of one marshmallow immediately or two a little later. These youngsters were swallowed up in long-term studies, which showed that those who demonstrated the ability to delay gratification tended to succeed in adult life.

Overwhelm
We walk out of a training event with a notebook filled with great ideas. Our head’s swimming with all the stuff we now think we need to implement right away if we are ever to experience anywhere near the kind of success that the speaker promised. And what happens? We do nothing.

I remember coaching a salesperson stuck in ‘non-activity’. She had been told that to succeed in real estate she needed to make at least 50 calls a day and she had heard that some of the top agents made 100 calls a day. At the time she was only doing 10 calls a day. The thought of going from 10 to 50 created a feeling of overwhelm. The result? She took no action a tall to reach this goal.

That’s the problem when you hear about a great idea. Your brain instantly goes into what I call ‘How the hell will I do that?’ mode. The bigger the goal, the greater the sense of overwhelm. Now don’t get me wrong; I’m not here to put you off big goals. Quite the reverse! I’m just pointing out that, faced with new ideas that seem far away from your current position, you can get stuck in trying to work out ‘how’ to do it. This results in procrastination and non-action.
There are also many ‘self-sabotaging behaviours’ we can have when it comes to implementation. Here are a couple of examples.

So what’s the solution to all this ‘non-implementation’? Here are two hot tips to get you implementing.

Without either of these you’ll be easily distracted. You won’t implement either. And you won’t make the effort or take the ‘right action’ steps. So when a person has no clear vision, no big picture or ‘big why’, what’s left to motivate them is all short term stuff.

When you’re clear about your vision and want it enough (I call that having an ‘emotive craving’) you’ll be less inclined to be distracted by your short term need
to resolve tension around unwanted circumstances. In other words, you become less ‘reactive’ to your current situation and more ‘pro-active’ about taking the right action towards what you really want.

Have you seen the movie ‘City Slickers’? There’s an old cowboy in it named Curly who’s very wise. When asked what the secret to life is, he holds up a finger and says,‘One thing. Just one thing.You stick to that and the rest don’t mean sh*t.’ That’s Curly’s Law and its one of the big keys to implementation. Implementing great ideas is ultimately about learning how to defer gratification, take the right action and relentlessly head towards what’s really most important. 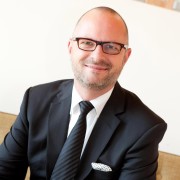 Peter Hutton is the Director and CEO of Hutton & Hutton Real Estate. Peter brings over 25 years real estate experience as well as a wealth of expertise to the industry through his book, ‘The Love Price’.
SEARCH ELITEAGENT.COM
Close
QUICK NAVIGATION
Close
Log In