House rents have increased in most capitals, with the rental market outlook looking positive for investors – according to the December quarter Domain Rent Report.

Median house rents increased in Sydney, Melbourne, Brisbane, Adelaide, Canberra and Hobart. The resource capital of Perth continued to remain the clear exception to the trend, with high vacancy rates and rents continuing to fall.

In the same period, unit rent prices were more subdued, with growth in Canberra, Hobart and Darwin, but decreases in Sydney, Perth and Melbourne. Brisbane and Adelaide remained stable.

“House rents are on the rise again with sharp increases reported over the December quarter, proving difficult for tenants on the lookout for affordable accommodation in tight rental markets.

“Most capital city rental markets remain highly competitive for tenants with tight vacancy rates and rents likely to stay on the rise.

“However, higher rents and flatter prices growth have acted to push up gross rental yields in some markets, an incentive for investor activity. The outlook for yields remains relatively stable with prices and rents set to generally track each other.” 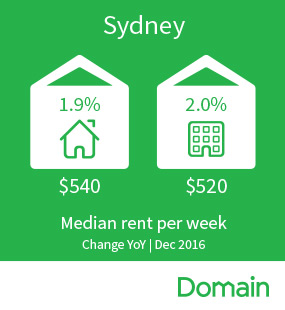 Median house rents in Sydney increased by 1.9 per cent, over the December quarter, reaching $540 per week. Sydney unit rents fell by 1.0 per cent over the quarter, to $520 per week.

Despite falling over the December quarter, Sydney unit rents increased by 2.0 per cent over the past year, closing in on the median house rent and remaining well ahead of median rents in other capital city markets.

“Sydney continues to be the most expensive capital city rental market for tenants but, as more locals consider long term rentals as an alternative to buying a home, the capital city continues to present interesting opportunities for investors,” said Domain Chief Economist, Dr Andrew Wilson. 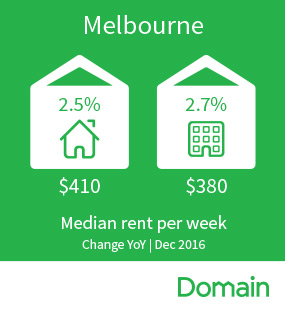 Melbourne’s median house rents increased by 2.5 per cent over the December quarter, reaching $410 per week. The capital’s median unit rents remained steady at $380 per week, as reported in the September quarter.

“The record levels of new construction and surging investor activity in Melbourne has not yet eased prices, with house rents on the rise and unit rents holding steady.

“The increased supply of apartments on the market is being offset by strong demand generated from high levels of migration and a relatively low numbers of first home buyers,” said Domain Chief Economist, Dr Andrew Wilson. 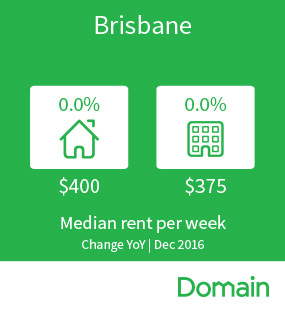 Brisbane median house rents have held steady over the December quarter, remaining at $400 per week. This is the third consecutive year of flat growth for Brisbane house rents.
Median unit rents have also remained consistent in Brisbane over the quarter and year, at $375 per week.

“Although house rents in Brisbane have remained steady for the past three years, rising vacancy rates are likely to ease price growth in the capital,” said Domain Chief Economist, Dr Andrew Wilson.

The median house rent for Adelaide increased by 2.9 per cent, over the December quarter, reaching $360 per week. This quarterly increase returns Adelaide rents to the prices recorded in December 2015.

The median unit rent has experienced no annual growth, remaining at $290 per week.

“Adelaide prices have been remarkably consistent over the past year. The quarterly growth of median house rents is good news for investors but could present mixed results for tenants in a tight rental market.” said Domain Chief Economist, Dr Andrew Wilson. 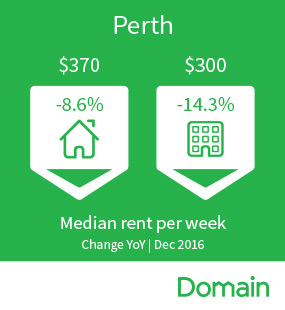 “The Perth market continues to buck the trend of median rent increase, with rents falling again this quarter. If the capital remains on its current trajectory, it is set to soon become the most affordable city for tenants out of all the capitals,” said Domain Chief Economist, Dr Andrew Wilson. 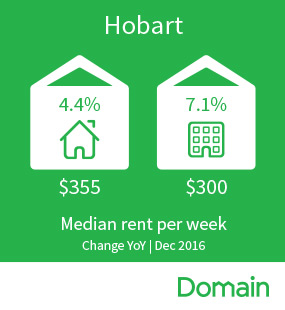 “Hobart’s tight rental markets have continued to stimulate rent increases over 2016. While the city remains the most affordable market, its prices are quickly closing in on other capital cities such as Adelaide and Perth, ” said Domain Chief Economist, Dr Andrew Wilson.

The median house rent in Canberra surged over the December quarter, rising by 5.3 per cent to $500 per week. This is an annual increase of 7.5 per cent and the most significant yearly result of all capital cities.

Canberra unit rents also increased over the quarter to $420 per week, a 5.0 per cent quarterly increase and annual growth of 7.7 per cent.

“The Canberra rental market reported a strong quarter, with significant increases for both house and unit rents despite the recent high levels of apartment construction. The growth of median rents continues to make the capital an interesting prospect for investors,” said Domain Chief Economist, Dr Andrew Wilson. 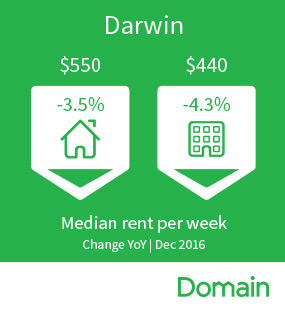 Darwin house rents have held steady over the December quarter, remaining at a median of $550 per week. Despite the stable quarter, the median rent has decreased 3.5 per cent over 2016.

After eight consecutive quarters of price falls, the Darwin median unit rent has increased over the quarter, up by 3.5 per cent to $440 per week.

Rental yields are on the rise, with the growth in house rents translating into increased gross rental yields for Sydney, Melbourne, Adelaide and Canberra. Hobart has the highest gross yields for houses at 5.53 per cent and units at 5.75 per cent, just ahead of Canberra at 5.70 per cent.

Low vacancy rates have tightened over the December quarter, with the results reflecting the underlying supply and demand dynamics of local markets. The latest vacancy rate data for December reports a continuing disparity in outcomes between the capitals.

House rental markets in Sydney, Melbourne, Adelaide, Hobart and Canberra remain tight. With the exception of Sydney, vacancy rates for all these capitals are now lower than those recorded over the December 2015 quarter.

Rental markets in Perth, Brisbane and Darwin continue to offer more choice for tenants with December house vacancy rates of 4.1 per cent, 3.0 per cent and 2.5 per cent respectively.