Eye-catching images and animation of the waterfall were revealed at an event held in Sydney today.

“This development is something entirely unique inspired by the power of nature,” said Crown Group Chairman and Group CEO, Iwan Sunito. “With this design, we are breaking with tradition. The green spaces and natural elements create a luxurious, balanced environment for residents to relax and recharge.”

Mr Sunito said there was a renewed urge among many people for a home which enables them a sense of escape from the hustle and bustle of the city.

“Landscape has been fundamental to Crown Group’s developments and with Waterfall by Crown Group we want to take that to the next level, bring nature back into the city.

“Waterfall by Crown Group is a testament to our continual push to create contextually appropriate and innovative residential developments which are relevant to today’s society,” Mr Sunito said. 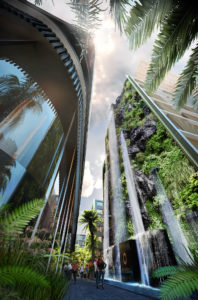 “Creating the tallest man-made waterfall is just one of the ways we are bringing nature back into the lives of our residents,” he added.

Located at 18 O’dea Avenue Waterloo and totalling 331 residences, Waterfall by Crown Group is designed by award-winning architects SJB, and features a specially commissioned, spectacular seven-storey waterfall cascading down one of the development’s four elemental buildings.

Natural luxury resonates through the communal spaces as well, including tranquil, ground-level water gardens, a recreation deck, an Infinity rooftop pool with a sky garden and terrace, and a secluded bamboo-covered walkway. Guests will also enjoy a state-of-the-art gym, function room with a catering kitchen, music room, and onsite retail.

Waterfall by Crown Group is conveniently located in Sydney’s Green Square, in the heart of Waterloo.  An up-and-coming area, Waterloo is in the midst of a transformation and offers easy car, rail and bus access to Sydney CBD and Sydney Airport.

Construction is scheduled to begin this year with a targeted completion in 2020. Apartments are priced from $650 000 and Crown Group is now accepting expressions of interest. For more information, visit www.waterfallbycrowngroup.com.au