The world’s most recognised real estate jacket is turning pink for the month of October in an initiative aimed at raising awareness and funds for Cancer Council’s ‘Pink Ribbon’ campaign.

For the third year running, Century 21 agents across Australia and New Zealand will be seen at auctions, open homes and around their local communities wearing limited edition pink jackets, complemented with pink accessories such as scarves and ties.

“Each day, over 50 Australian women are told that they have breast or gynaecological cancer,” said Charles Tarbey,  Century 21 Australasia Chairman and Owner.

“Cancer has such a devastating impact on so many Australian lives and our network wanted to play a small part in supporting the valuable work of Cancer Council.

“Our offices embrace the chance to get creative in planning events and activities to rally the support of their local communities behind the Pink Ribbon campaign.

“Regardless of whether you are interested in real estate or not, we hope to see as many people as possible attend the fundraising events and have some fun supporting such a worthwhile cause,” said Charles Tarbey. 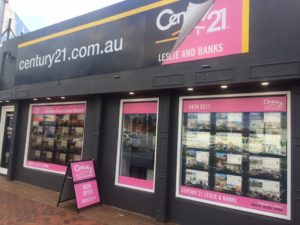 During auctions and open homes in October, Century 21 agents will be collecting donations, selling pink merchandise and hosting many exciting fundraising events in their local communities.

Pink themed charity golf days, charity auctions and awards dinners will be held in each Australian state and in addition, the Century 21 website and marketing collateral will also be making the switch to pink.

“Cancer Council is proud to partner with Century 21 in support of Pink Ribbon to help beat women’s cancers. This year it is estimated that 20,000 women will be diagnosed with a breast or gynaecological cancer and sadly, around 12 Australian women will die from women’s cancers each day,” said Professor Sanchia Aranda, CEO of Cancer Council Australia.