The Richardson & Wrench group has opened a new office in the fast-growing Illawarra region which will start trading on Monday.

Known as R&W Dapto, the new office marks the return of the franchise to the Illawarra region after an absence of many years.

“Dapto is a significant signing for us in an area that is set to increase its population by 50 percent in the next five years,” Cocks said.

“Prices in the Illawarra have risen 40 percent in the past four years, and much of that can be attributed to the overflow from Sydney.

“With a train station, schools, strong community and about 90 minutes from Sydney, Dapto is ticking all the boxes for a lot of buyers priced out of the Sydney market or cashing out and taking a tree change.”

Cocks said the conversion of MMJ Dapto to Richardson & Wrench would benefit from the group’s network of metropolitan offices with increased opportunities for a referral. 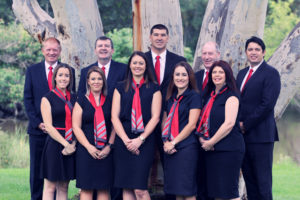 “There is a lot of referral between offices and this is a benefit not only for our franchisees but also their customers.

“The directors have built a very successful business that will be an asset to our network. They have close community ties and an excellent reputation in all fields of real estate and project marketing with a particularly strong property management business.”

Alan Chaffers, who founded the agency 28 years ago, said the ready availability of land suitable for residential development was the driving force behind Dapto’s growth.

“In the next five years another 5000 homes will be built, and a large portion of the buyers will be coming from Sydney’s west and south.

“The appeal is obvious. Dapto is not a lot further from the Sydney CBD than Camden, the freeway is less congested, there’s a train line, and we’re only 15 minutes from the beach, not an hour and 15. And for families with older children, Wollongong University is a major asset.

“We also see a lot of interest from Sutherland residents who are selling at the peak and buying an affordable home here and pocketing the difference or opting for acreage and a lifestyle change.

“Dapto is growing, and with the move to R&W we plan to grow with it.”

House and land in new subdivisions in Dapto can still be picked up for under $650,000, and the resale market offers even better value.