The Real Estate Institute of Western Australia (REIWA) and Council on the Ageing (COTA) have come together to campaign for transfer duty reform for the elderly, and have welcomed the Barnett government’s announcement that it will commit to a $15,000 transfer duty concession for seniors if re-elected.

REIWA president Hayden Groves said he was happy that the current state government had committed to easing the burden of transfer duty for seniors if re-elected March 11.

“Transfer duty creates a significant barrier for seniors over 65 on fixed incomes who are looking to change their lifestyle or downsize. The cost of transfer duty on a median house price of $520,000 is $18,715, which is almost equivalent to the entire annual standard aged pension of $20,745.40, Groves said.

“The $15,000 concession the Government have committed to, which is capped at $750,000, will make a substantial difference to those seniors looking to “right size” into more suitable accommodation, and will help address the issues of housing affordability, choice and liveability,” he said.

COTA WA chief Mark Teale said one in three voters in the state were over the age of 60 and seniors made up 19 percent of the total population.

“Overwhelmingly older West Australians want to stay living in their home, in the local communities they contribute so much to, and where their family and friends are.

It’s important to encourage ageing in place by providing seniors with access to appropriate housing options.

“Our members, many of whom are on a fixed income, find the existing transfer duty arrangements to be a major barrier to ‘right-sizing’, so this announcement is very positive news,” Teale said. 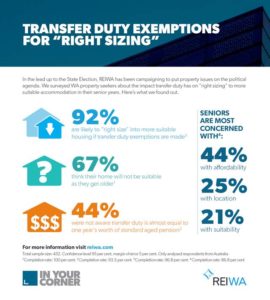 REIWA scenario analysis shows if transfer duty reform is implemented in WA for seniors over 60, it would have a positive impact on state revenue.

“REIWA’s analysis estimates the policy reform would release 21,000 homes into the market, enabling West Aussies who are seeking to trade-up the opportunity to reside in a more appropriate housing to meet their needs.

“While the concession would cost the state government $303 million from the 21,000 senior households ‘right-sizing’, the resulting trade-up activity would generate additional transfer duty revenue in the order of $393 million, leaving a net surplus of $90 million.

“Even if a more conservative number of properties were released into the market, the difference in property values transacted would still provide a net gain for government coffers,” Groves said.

As part of its State Election campaign, REIWA surveyed the WA public about this policy reform issue. The survey asked respondents what their greatest concern was for their senior years, and the top three concerns were affordability (44 percent), location (25 percent) and suitability at 21 percent.

“The results of the survey demonstrate what our members have been telling us – that suitable and affordable housing is a key concern and that transfer duty concessions can make a significant difference to people needing to ‘right size’,” Teale said.

Additionally, 92 percent of respondents stated that they would be more inclined to move house in their senior years if an exemption to transfer duty was introduced.

“It’s pleasing to see the Barnett Government are listening to the public and the industry on this important issue.

“We now call on Mark McGowan and the Labor party to commit to looking after our seniors, if elected to Government, by legislating a transfer duty concession for West Australians aged over 60 on their primary residence,” Groves added.