After 25 years at Ray White South Brisbane, Dean Yesberg has handed over the reigns to focus on Ray White Brisbane CBD Residential.

Luke Croft, Alan White elite member and in the top two per cent of the Ray White Group, will take over the leadership at Ray White South Brisbane.

Originally a panel beater by trade, Mr Croft has spent 14 years in the real estate industry – but famously he still loves restoring classic and exotic cars.

His love of classic cars stemmed from dad and mentor Ron Croft, an international Qantas pilot. They were very close before his father’s passing 18 months ago.

“Yes, Dad was a rev-head and he passed his love of cars on to me.”

Mr Croft’s first business was a custom panel shop called Croft’s Body Works in the Redlands, which he owned until the move into real estate.

“I went straight from working on cars to wearing a suit and tie in real estate, and have loved every moment of the last 14 years,” Mr Croft said. 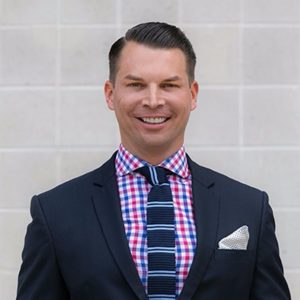 “Older-style apartments are like buying a classic car; they have a real point of difference and they are usually of larger proportions and have views that cannot be built out as they have character homes in front of them which cannot be removed,” he said.

“I have lived in Teneriffe, New Farm, Fortitude Valley and Hawthorne, but the Highgate Hill and the West End community is so very friendly and not pretentious.

“This area has always had such a great community spirit with street parties. It’s relaxed and you don’t have to get dressed up to go down the road and have a coffee.”

Mr Croft said there had been such huge growth in Highgate Hill and West End which is attributed to its location and proximity to the city.

Highgate Hill is famous for the first high-rise apartment block in Brisbane, called Torbreck. These heritage-listed units at 182 Dornoch Terrace were designed and built between 1957 and 1960.

The project acquired the name Torbreck to recognise a small, gabled timber cottage that previously occupied the site.

“I’ve sold more than 90 apartments in Torbreck over 10 years. I’m the main selling agent there and I know everyone by their first name, and many owners have moved a few times within the building,” Mr Croft said.

“There’s at least 20 architects that I know in the building. They love mid-century building; it is certainly very fashionable. People love retro cars, clothes and architecture. I love Torbreck, it’s got such great history and some of the stories I have heard – if only the walls could talk.”