JARROD CARMAN is the driving force behind the Eview Group Mornington Peninsula office in Victoria, with nine years in real estate and an Honors degree in Psychology. JOEL HOOD works in the same office, but as the principal of his own brand and business. Collectively, the two of them swept the Eview Group Annual awards in 2016, with Carman winning Principal of the Year and Hood winning Salesperson of the Year. You might think this would be difficult to pull off, with the two of them largely competing in the same market for the same listings. But that’s not the way it works, as Samantha McLean found out.

Joel Hood has been in real estate for just three and a half years, and is now writing close to $1m in commission. Carman, as selling principal, writes just over the $1m mark. In addition to winning Director and Salesperson of the Year, both also won group awards for highest GCI in a single month (Director and Salesperson).

Given that essentially they are separate businesses within the same office, first up I want to know how it all works. Says Hood, “From the first conversation we had about me coming across to Eview, it was interesting, because Jarrod was my main competitor, but it was the positive feedback and seeing him win listings unopposed that also attracted me to join him in his office.”

STARTING OUT
While Hood wasn’t keen on taking on something the size of Carman’s business, which includes property management, having his own recognisable brand was appealing. “Being able to brand myself and have people in my area who know me with my brand and my marketing, elements that encompass who I am, was definitely another thing that attracted me to Eview Group. With their model, I can run a business and continue to prospect, list and sell, without having all the extra management that goes along with it.”

I can’t imagine trying to do it on my own again. I was writing some big numbers, but it was just carnage.” – Jarrod Carman

Even Carman admits that Hood looks like his own brand and that the two of them have on occasion been invited to the same listing presentations. “We’ve had the same agents go into an appraisal to compete for the business; so it’s interesting at times, with a lot of frank conversations!” laughs Carman.

“But for someone like Joel, who was always going to be a gun – our set-up gives him the ability to run his own business group without the hassle of running his own business.” And, like a good leader, Carman adds, “I like to support guys like Joel, because [laughs] then it’s not all about the ‘Jarrod Carman show’.”

CLIENTS FIRST
So what happens when a lead comes through the door that’s on more than one person’s database? Hood says it’s all about communication. “With leads that come in, most are either looking for me or looking for Jarrod. We work out what is best for the client and both our businesses. You get some people who are like dogs around a bowl, fighting each other for the listing or the sale. It’s open with us; we always help each other out.”

“But, when Joel joined,” recalls Carman, “he went straight at it and got his own business. He knew I wasn’t going to just hand it to him!”

STRUCTURING THEIR EBUs FOR ACCELERATED GROWTH
Both men also run their own high-performing teams. Hood and his team have tripled their numbers in the past three years, which he attributes to excellent teamwork. “In 2014 I did about 300k, and then in 2015 370k; I put Melanie (Nimmo) on as a PA in 2015. This year we are at $958k, so should get to the million by year end. Melanie’s employment agreement is with me, as are the other members of the team. I put Adrian (Calcedo) on in January 2016 as a buyer’s agent. And another buyer’s agent, Cory (Liddle), in September, completing the team.”

Hood’s team also have a career path mapped out for them. For example, Hood says Adrian will roll into being a prospecting PA in 2017 before becoming a standalone agent in his own right. “So it’s like an apprenticeship, where you come in nurturing buyers. Then you work your way up to doing prospecting, appraising, listing properties properly and managing the campaign, and then go out on your own.” And so the model always progresses.

While Carman as office principal is keen to compliment Hood on his hard work, persistence and succession planning, there is still the ‘Jarrod Carman show’ that I am still keen to hear about. “We have a team of four as well. Caitlin is an absolute dynamo; she revolutionised my business. She thinks before I have to think. She just knows what to do – she’s ‘Donna’ [from Suits]! I also have two buyer’s agents. I come in at the end of the negotiation and do what I need to do to finish the deal.”

Referring to the way he and Hood work together but separately, Carman adds, “I think both of us are very good at picking good people and nurturing them. Everyone wants to love coming to work and enjoy what they do, not feel like they’re working for a boss. We create an environment where people feel valued and that their contribution is appreciated.”

The calls must get done, because we know they all add up. My PA has said it before perfectly: ‘You don’t leave till you achieve.’” – Joel Hood 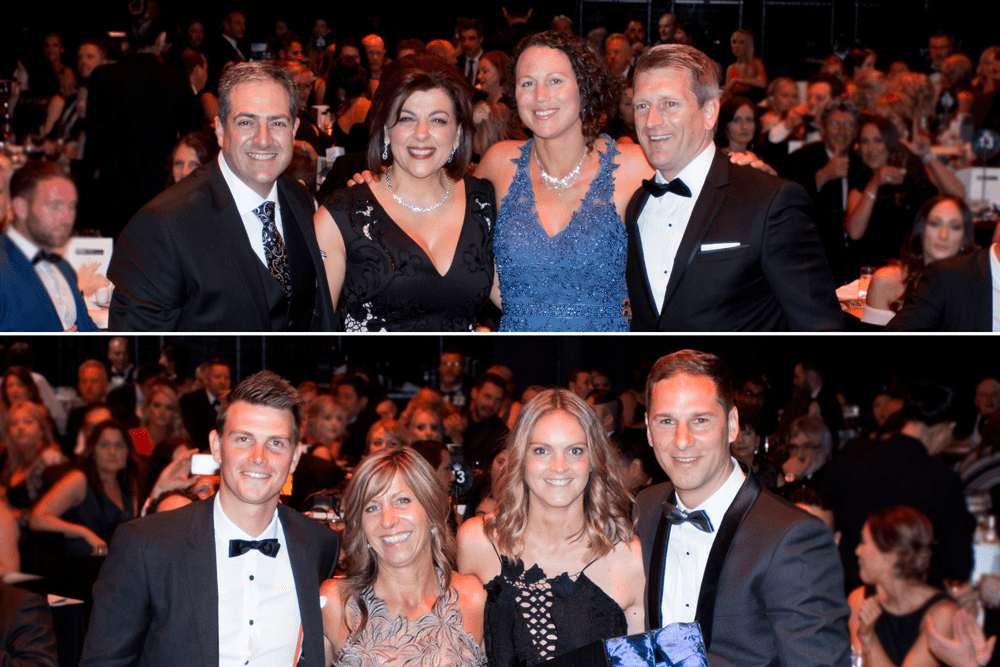 Both agree that the EBU models they run make sense from a lifestyle point of view. Says Hood, “If you want to go away, or put your phone away, you know your team’s got things covered, especially if the client feels comfortable with that team. Likewise if you get sick, children are unwell, or whatever it might be. You don’t have to worry about answering the phone, because someone’s got your back.” This is further augmented through Eview’s model of taking care of the office back end (trust accounting, marketing and more) which frees up our teams to focus on dollar productive activities.

Carman adds, “It allows you to give great service too. I can’t imagine trying to do it on my own again. I was writing some big numbers on my own, but it was just carnage, absolute carnage. I didn’t see my family enough and something had to give. And the service levels dropped. But if you have a great, functional team you can cover it all and possibly bring more business in.”

EMBRACING DIFFERENT WORKING STYLES
It is clear from the friendly yet competitive banter between the two men that their collective success is underpinned not only by a great relationship but also a mutual respect for the different working style each has. Hood says he is structured and process driven, whereas Carman is more about making sure that his people are all “OK and on track”.

“The [structure] is just what I like,” says Hood, “But I take a lot out of the fact that Jarrod can just wander into an appointment without as much preparation, and just connect with a vendor so well. And it reminds me sometimes to go back and just work out who they are, what they want, and help them out rather than being their typical real estate agent.”

The discussion now turns to diary management. Says Hood, “Monday is non negotiable in terms of just follow-up and preparing for the week. My calendar is blanked out until 2pm, and ideally nothing for the rest of the day. I work Monday to Saturday, full days. Every morning of the week is prospecting; it’s similar to what every agent says works for them in terms of mornings in, afternoons out. I think a lot of people think they’ve got to do it perfectly, but it doesn’t always happen that way.

“I’ve now brought in Thursday mornings for the family. I really wanted to try and get some balance because [at one point] we were just running around like crazy. Sunday was also the only day off and that was a ‘crash day’. We went so hard all week, especially Saturdays; [some days] we’d negotiate until 9pm. And come Sunday, I would be basically a vegetable on the couch; so with three daughters that was no good. So yeah, just having that extra time with the family; it’s brought a little bit of life back into my routine,” says Hood.

Carman also runs an am/pm structure as much as he can, but it’s more about keeping his office door open for the team helping with any issues that may arise.

“I’m on the phone as much as possible in the morning and in the afternoon I have appointments. I have a fairly ‘open door’ policy, so I tend to get pulled in different directions. And I like that, because things arise and I don’t want people to hang onto things if they don’t get dealt with at the time. I’m there for the team as much as possible; I juggle that as well as listing and selling.”

Carman continues, “And I try and do extra stuff, too. I like to coach people. I do like speaking at conferences and things like that. And it’s a different scenario to Joel, because I have a property management business to run as well. But, thankfully, we’ve got a great team so I’m not putting out fires all the time. I do like watching people when they walk through the office to see what sort of mood they’re in and, if there’s something I can see is troubling someone, to pull them aside. I’d rather take time away from my prospecting calls to make sure that person is okay.”

INDICATORS OF SUCCESS
Going back to Carman’s earlier comment about knowing that Hood was ‘always going to be a gun’, I ask him what he looks for that says someone will be successful in the industry. “It’s a good question,” he muses. “Hard work for one. Having an attitude of abundance… Actually I just keep going back to hard work, hard work and hard work! And being disciplined. You have to be disciplined and not look for excuses. People look for excuses as to why they’re not successful and they blame everyone else out there. There are no external forces stopping someone from being successful – it’s only themselves and their own mindset. Joel has that work ethic and that mindset.”

Earlier in our chat, Hood made the comment about how much respect he has for Carman, that he is technically the boss but doesn’t act like your traditional ‘boss’.

Says Hood, “If people do say [he’s the boss], he’ll jump in straightaway and say, ‘I’m not the boss. I’m just a leader, and Joel’s also a leader.’ But Jarrod is always accommodating to our ideas and opinions. I think that’s why people are attracted to him as a leader, because he will listen.

“I saw all the hard work [he put in]. I was competing against him so I could see it wasn’t just handed to him on a silver platter. And that is always a reminder of what I needed to do to get there.”

“Mostly it’s focus on the dollar-productive things. If I’ve done my KPIs, I can relax the rest of the day. The calls must get done, because we know they all add up. My PA has said it before perfectly: ‘You don’t leave till you achieve.’”